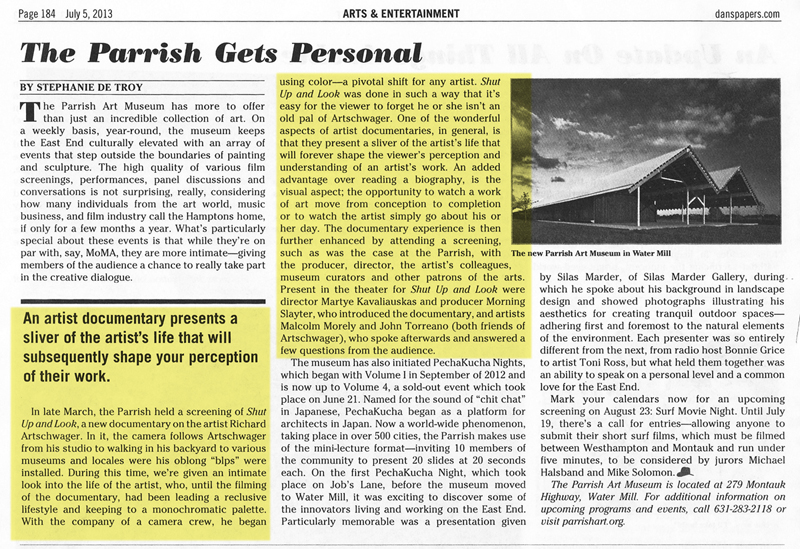 An artist documentary presents a sliver of the artists’s life that will subsequently shape your perception of their work.

In late March, the Parrish held a screening of Shut Up and Look, a new documentary on the artist Richard Artschwager. In it, the camera follows Artschwager from his studio to walking in his backyard to various museums and locales where his oblong “blps” were installed. During this time, we’re given an intimate look into the life of the artist, who, until the filming of the documentary, has been leading a reclusive lifestyle and keeping to amonochromatic palette. With the company of a camera crew, he began using color—a pivotal shift for any artist. Shut Up and Look was done in such a way that it’s easy for the viewer to forget he or she isn’t an old pal of Artschwager. One of the wonderful aspects of artist documentaries, in general, is that they present a sliver of the artist’s life that will forever shape the viewer’s perception and understanding of an artist’s work. An added advantage over reading a biography, is the visual aspect; the opportunity to watch a work of art move from conception to completion or to watch the artist simply go about his or her day. The documentary experience is then further enhanced by attending a screening, such as was the case at the Parrish, with the producer, director, the artist’s colleagues, museum curators and other patrons of the arts. Present in the theater for Shut Up and Look were director Maryte Kavaliauskas and producer Morning Slayter, who introduced the documentary, and artists Malcolm Morely and John Torreano (both friends of Artschwager), who spoke afterwards and answered a few questions from the audience.
Dans Papers, July 5, 2013
by Stephane de Troy